For more information on the CID Project and to follow the process that has led to the exhibition opening, check out the project blog and follow the work on social media:

The recent explorations as part of the CID Project have been inspired by ongoing dance enquiry with Artistic Director Danielle Teale and dancers with Parkinson’s on the theme of collectivity, intimacy, individuality and creativity. The CID Project brought dance, music and visual art together and the resulting exhibition of work has been inspired by the notion of celebrating achievement and seeing the dancing body in many forms, including captured by the lens and gaze of the artist. This draws attention to the visibility of people with Parkinson’s in society, people with Parkinson’s as artists, and as the subject of art and artistic enquiry. Not only for the viewer, but for the dancers themselves, this has been a process of discovery of the dancing body and an affirmation of creative identity. 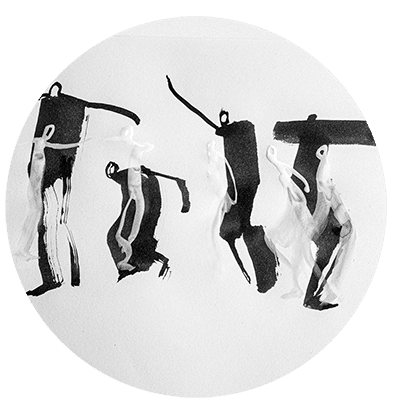 Brian Hartley is a Glasgow based artist whose work is a combination of visual art, photography and design. Integrating these skills with his experience as a physical performer, Brian creates multi-disciplinary performance events through his company stillmotion, including We Dance. Wee groove, an interactive dance performance for families and young children, which has been touring internationally since 2008. As a visual artist he has been making drawings and paintings inspired by dance for many years, working with dance festivals and featuring in exhibitions in UK and internationally. In recent years this eye for capturing dance and movement has diversified into dance photography and multimedia work, working with many contemporary dance companies on Scotland

During the CID Project I explored a variety of techniques and introduced chance and unpredictability to the work through watercolour effects, creating pools of ink, smudges, fading lines and forms blurring into one another. Conversations with the dancers offered a further resonance, introducing thoughts about language, allowing the images of dancers to become hybrid forms, resembling handwriting, a score, or trace of movement on the paper. I hope that these works portray the choreography in a way that is more individual, vulnerable, precious, and also full of presence and intention.

Sara Hibbert is a London-based visual artist working primarily with moving-image and photography. She graduated in 2015 from the Royal College of Art (MA Photography), and is a current participant of the London Creative Network artist development programme at Four Corners. Past exhibitions and commissions include: Brighton Photo Fringe, Alchemy Film and Moving-Image Festival, Chelsea & Westminster Hospital Trust, Two-Hundred Acres at the Pumphouse Gallery, Night Contact at Brighton Photo Biennial, and Altai Collective: RCA Dyson Gallery.

By cropping in on closeup movement between hands and limbs, the final images explore the notion of shared space, of presence becoming visible within the gaps, of collective timing and exchange. In collaboration with each dancer, I have also produced a series of movement portraits, which will be presented as a postcard series.