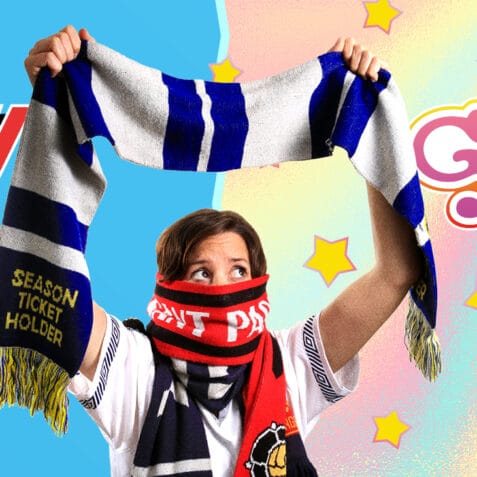 It’s 1998.  Geri Halliwell is leaving the Spice Girls and David Beckham is wearing a sarong. Somewhere in England a ten year old girl is trying to be a football fan.

Ever wondered what happened to David Seaman? Bryony has. Bryony makes work about pop culture, childhood and performance. This is a dumb, fun, multimedia clown show in which Bryony takes the audience back to the heady heydays of nineties football and the heights of her own football career (aged 10). She explores what her younger self loved about football and why this changed. If you like Natalie Palamides, s**t nineties stuff and the Spice Girls then you’ll love this.

Audiences leave feeling delighted, wondering whether they do, in fact, like football and deciding to get back in touch with their old primary school mates for a kickabout. After all, is football for everyone or isn’t it?

Bryony makes and performs live art. She’s interested in community, childhood and the act of performance. She’s got a background in longform improv and clown and her debut comedy feature film, Akela, has won multiple awards internationally. She performs regularly at the Free Association in London and is a graduate of the Soho Comedy Plus Lab. When she was ten, her football team won the District championships and she played the recorder on stage at the Royal Albert Hall so she probably peaked at ten to be honest.