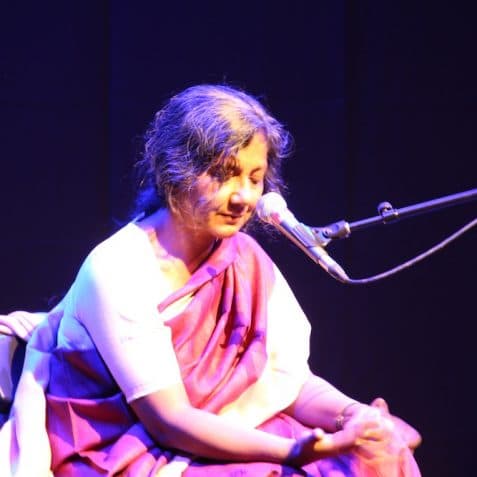 A special evening from Komola Collective as they present Walking with Songs; a journey through the music of Bengal and beyond with Bengali singer, Moushumi Bhowmik.

As part of her 2018 UK tour, Moushumi Bhowmik will grace our stage in this special, one-off musical performance and talk hosted by Komola Collective.

Moushumi is a Kolkata-based, Bengali singer and writer, who has been singing and collecting songs and stories for decades, from the broken land of Bengal, comprising Bangladesh, India, and the UK.

In this performance of Walking with Songs, Moushumi will be talking about her work of archiving the music of Bengal, illustrating her descriptions with song and field-recordings, playing alongside long-time collaborator and composer Oliver Weeks.

Moushumi Bhowmik (মৌসুমী ভৌমিক) is a Bengali singer-songwriter and music researcher. She has worked with filmmakers, musicians, theatre directors and authors in India, Bangladesh and the UK. Her music has been officially recorded by HMV and Times Music, while bootlegged copies of her music are sold under many labels, mainly in Bangladesh.

Moushumi has been working with sound recordist Sukanta Majumdar on a research project on the folk music of Bengal, titled The Travelling Archive.

Komola Collective are a London-based theatre and arts company dedicated to telling the stories that often go untold – stories from women’s perspectives.