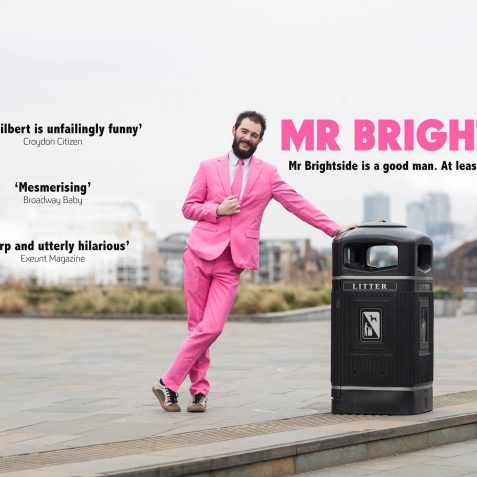 After a sold-out show at Brighton Fringe Festival, Nick Gilbert brings this hilarious, honest and cutting comedy about masculinity and mental health to Poplar Union.

For a famous TV personality, hosting a hit show in front of a live audience should be easy. But tonight, something is very wrong. Dressed in pink and full of guilt, Mr Brightside battles his way through clueless puppets, overtly sexual kids toys and a royally pissed off mirror to keep the show going.

A hilarious, honest and cutting comedy about masculinity and mental health.

This performance will be BSL interpreted.

Nick Gilbert is pretty unremarkable, but most people seem to get on with him okay. A founding member of multi-award winning theatre company Zoo Co, he’s been floating around doing acting, writing, comedy and music for 6 years. For four of those years he’s been working on Mr Brightside. So whatever you think of the show just remember that it took him four years to make. Four years. He also once played a fire-spinning pirate.