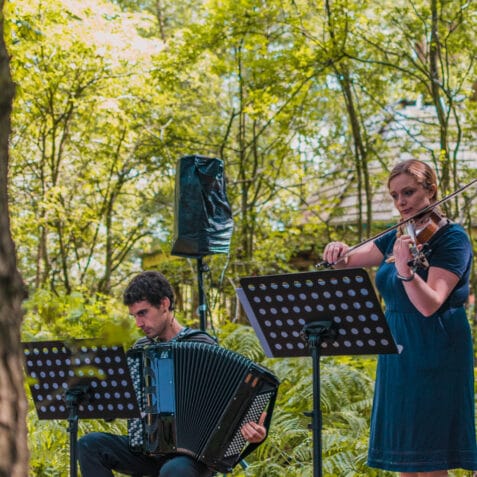 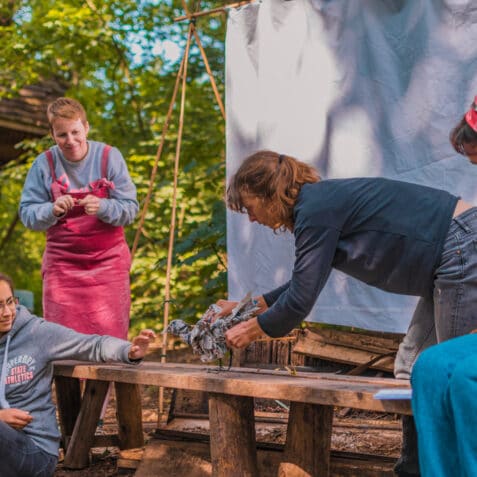 Join us in Bartlett park for an outdoor family theatre performance of The Promise by Handpicked Productions, based on Nicola Davies’ celebrated book.

The Promise is the story of a young girl who is lost in a cold city; her life, and that of the community around her is transformed when she unwittingly makes a promise to plant seeds. This unexpected promise to plant is central to the production, which asks audiences, like the girl in the story, to make their own promise to plant.

Part opera, part environmental event, The Promise, will curate a space for social change, encouraging its audience to come together to take personal and collective action on the climate crisis. With its simple story about a lost girl who finds herself, The Promise leaps naturally into Operatic adaptation; her transformation and that of the city and people surrounding her will speak powerfully through musical development, her growth and the blossoming of nature mirrored perfectly in Daniel Saleeb’s inventive and sensitive score.

Based on Nicola Davies’ celebrated book, The Promise is centred on communities and the transformative power of cultivating and nurturing green spaces, especially in urban environments; it encourages and creates opportunities for audiences to take positive action on the climate crisis, to build resilience and connect to nature which will continue long beyond the project.

Lucy Bradley is a director working in the UK and Europe in settings ranging from regional theatres and drama schools to large-scale opera houses and site-specific locations including Royal Opera House, Opera North, Glyndebourne Festival, Teatro all Scalla, Milan, Teatro Real, Madrid, Oper Koln and Opera Monte Carlo, The British Museum, The Brooklands Museum and The Corinthia Hotel. Participation has always played a large part in Lucy’s work and she is passionately committed to the creation of new Opera and Theatre for and with young audiences.

Daniel is a composer of wide-reaching and eclectic work, for the church, the concert platform, schools, film, theatre and opera. Recent performances of his commissions have included: Westminster Abbey; Milton Court Studio Theatre, the Victoria & Albert Museum, St. John’s Smith Square, St. Paul’s Cathedral and the BBC Proms. Following earlier study at Magdalen College, Oxford, and the Royal College of Music, Daniel graduated with Distinction from the MA in Opera Making & Writing at the Guildhall School of Music and Drama in 2017. He was generously supported by the Guildhall Scholarships fund and the Oak Foundation. In 2017- 18, he was a Fellow in Composition at the Guildhall.

Celebrated children’s author, Nicola Davies, originally trained as a zoologist and worked for several years as one of the original presenter’s of the BBC’s Really Wild Show. Nicola is known for her ability to introduce the natural world and its fascinating creatures to picture-book audiences. She has written over 80 books for children include One Tiny Turtle, Wild about Dolphins, Bat Loves the Night, Ariki and the Island of Adventures, Brave and the Fox, and Grow: Secrets of Our DNA.

Sascha Gilmour is a theatre designer, maker and puppeteer with a studio based in Cheshire. She creates work for plays, musicals, festivals, events and performance art. Working collaboratively, pushing boundaries and a focus on sustainability are at the core of her creative practice.

Ruth is a set and costume designer for theatre, opera and dance who trained at the Motley Theatre Design Course. Engagement, outreach and teaching forms part of Ruth’s practice and she is a lead artist for the Learning and Participation departments at Garsington Opera, English National Opera and The Royal Opera House. Ruth has designed many Operas and music productions for companies across the UK and is also an associate artist at Blind Summit. Internationally, she has worked at the Barbican, Bregenz and Spoleto Festivals, Abu Dhabi National Theatre, Princeton and MIT universities.

Anne is a producer who has worked in community and arts engagement in West Cumbria for 20 years. Her work increases access to cultural opportunities for communities and supports the growth of the local cultural infrastructure. She held roles at The National Trust, as Arts Development Officer for Copeland and Allerdale Borough Councils, Rosehill Theatre and Prism Arts before setting up Handpicked Productions. Examples of her producing work include Brundibar, The Rattler and Snappy Operas (all for Mahogany Opera & Rosehill Theatre), Harbour Tales with Storyteller Ian Douglas and Creative Connections (Rosehill Theatre), Picture of Me (Prism Arts), Midsummer Dreaming & At Autumn’s Mellowing (Handpicked Productions), Krankenhaus Festival (Sea Power and Aerial).

Tamzin is an award-winning producer with over 18 years’ experience in opera, classical music and theatre. Her work spans strategic planning, fundraising, producing and dramaturgy. Following roles with the Royal Opera House, London Philharmonic Orchestra and English National Opera, she took the leap to develop her career as a freelance consultant. She has since worked with a wide range of organisations including BBC Young Composer, Wilton’s Music Hall, Glyndebourne Festival Opera, Southbank Centre, Intermusica Artists’ Management, The National Student Drama Festival, Ensonglopedia, St. Endellion’s Summer Festival, and Théâtre des Champs-Elysées. At the height of the pandemic, she Executive Produced VOPERA’s L’Enfant et les Sortilèges which went on to win the South Bank Sky Arts Award for Opera 2021 and the Royal Philharmonic Society Award for Opera and Music Theatre 2021.