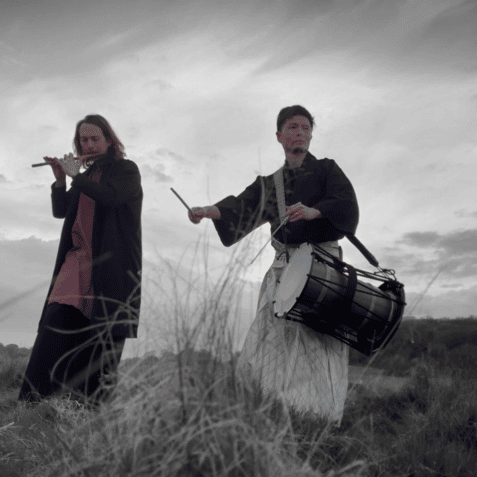 In Japanese mythology, Zashiki Warashi is a playful childlike spirit that lives in people’s homes, causing mischief but also bringing luck to the household. Akinori Fujimoto (taiko, Japan) and Mikey Kirkpatrick (flute, UK) have been on a long journey of discovery as musical collaborators, composing and improvising unique sonic dialogues that intend to surprise, transport and energise audiences through powerful theatrical performances, and bring them luck. Taiko (Japanese for drum) and flute is an ancient combination of instruments that in different cultures can represent earth and air, body and spirit, rhythm and melody. Inspired by these ideas combined with experimentation with movement and voice, live looping and costume, this mesmerising duo brings you their first ever full-length show.

Zashiki Warashi is a Taiko (Japanese drums) and Flute Duo based in London named after a mythical being, from the ancient Japanese folklore, that causes mischief in a household while it brings a good fortune and wealth to the family.

Akinori Fujimoto and Mikey Kirkpatrick began the Zashiki Warashi Drum and Flute Duo in 2004 whilst studying at Goldsmiths University in London as a way to connect their interest in folk and contemporary music from around the world with their spiritual and philosophical discussions in a playful way.

In September 2018, the pair focused their attention on the simplicity of combining Japanese Taiko with the western Flute, finding common themes in their cultures, often centred around the imagination, dream, nature, daily life and death.